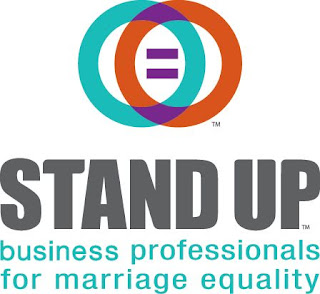 On May 24, 2012, one hundred Chicago wedding professionals gathered to STAND UP for marriage equality. Planners, venue owners, caterers, bakers, photographers, dress designers and others from every sector of the industry gathered in the West Loop for a video and photoshoot that had them say “I Stand!”
Starting with the wedding industry, but open to all fields, STAND UP asks businesses of all sizes and the professionals within those businesses to “come out” in support of same-sex rights. Anthony Navarro, wedding planner and STAND UP Co-Founder says: “I came up with the concept after President Barack Obama stated his personal support for same-sex marriage rights. Whereas The President had a global, televised platform from which to voice his support, I realized that even though my peers and I overwhelmingly support marriage equality, we had no common forum from which to speak.”
Anthony brought the “I Stand” theme to Cher Garrett, marketing professional and owner of Loft on Lake, an event venue in the West Loop. Cher embraced the concept and set her design and branding team at KGA, Garrett Associates into action developing the STAND UP identity and forming the organization.
Cher and Anthony are turning STAND UP into a nation-wide platform where thousands of wedding and other professionals can share their support, create a fresh dialogue and bringing much-needed positive discourse and perspective to the discussion surrounding same-sex marriage rights. This platform will allow individuals, as well as businesses, large and small, to show their support by becoming a member, sponsor or volunteer.  STAND UP members that elect to become Ambassadors can organize work groups and team members to submit photography and video which will post to the STAND UP website. Corporations can sponsor the cause or submit content & features. STAND UP small-business members will receive a profile on the website and decals to post on their shop windows or autos. There will be recognition for organizations that gather the most individuals together.
We encourage supporters to “make a statement with our fashion”, says Cher Garrett.  Merchandise featuring the STAND UP logo and iconic equality symbol will be available for purchase on the website.  Previous efforts, such as the wildly successful, “No H8 Campaign,” allowed people nationwide to show their personal support, and now there is a means for businesses to do the same.
“Although marriage is a highly personal arena, the fact remains that an estimated 1,400 state and federal benefits are denied to gay couples. Even as some states move toward equality, many overwhelmingly vote to deny rights. It just made sense to gather the people who maintain the wedding industry to say to the world: “I Stand!” said Navarro.
In only a month since organizing, the STAND UP team has seen a tremendous response from wedding professionals in Chicago. Dozens of professionals have taken part – and as the STAND UP Project nears its launch, it is building noticeable buzz in the wedding community.
The project is slated to launch on July 24th, at a town-hall style meeting at Loft on Lake.  To become a member or learn more about STAND UP, visit www.i-standup.org
STAND UP:
STAND UP is an organization formed as platform for business professionals to unite for acceptance of marriage equality. Through website content, video and other creative forms of communication they hope to educate, enlighten, and illuminate. Changes to legislation which provide all the same rights and legal benefits of marriage, regardless of gender, is at the heart of the STAND UP mission. By uniting in groups, representing a multitude of industries they hope to show that no matter who you are, or what you do, it is time to STAND UP for equality.
Anthony Navarro is owner of Liven-it-up Events an award winning Chicago based Event Planning Company. Cher Garrett is owner of KGA, Garrett Associates an award winning strategic marketing and branding firm and also owner of Loft on Lake, the quintessential Chicago Loft Venue.