With an amazing rehearsal dinner the night before, it was a tough act to follow on Saturday. I think I only had about 5 hours of sleep… just thinking about the next day and looking forward to a years worth of working with this family to see how the wedding was going to unfold.

Saturday afternoon I arrived at Salvage One in the West Loop. With so much set-up involved at Salvage One, it was agreed that I would be stationed at Salvage One to oversee the set-up & decor while early afternoon, the bride and groom would exchange vows at Bond Chapel. As I walked in, Sara and her crew was preparing the venue for the guests to arrive later that evening. The floors were being mopped and I found myself getting right to work on my checklist. Hand towels in bathroom, check, votive candles for the room, check, and many, many, more things “To Do.”

Things started to get really exciting when I heard the delivery truck from Tablescapes pull up. My Copper Link Chargers, Fruitwood Chivari Chairs, & Bengeline Linens arrived. The set-up crew was there to deliver the china, glassware, tables, chairs, linens, and ovens, hot boxes, and all of the items we needed that evening for the wedding. After the tables & chairs were set and the rentals delivered, the catering staff arrived and Chef Luke with Bonsoiree Catering pulled his truck up in back to load in. This is where I began to get truly excited! 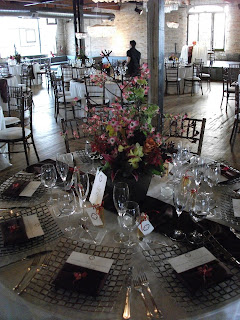 The linens were put on the tables and they were set with silver flatware, Grand Cru glassware, Copper Link Chargers, and bengeline burgundy napkins custom made for the evening, topped with a bottle of home made limoncello for each place setting. I am explaining the setting because we probably spent 10 hours just working on it. It was not the couples fault, we just had a hard time matching the base plate to the vase to the room and so on! Anyway, Blumgarten later delivered these gorgeous centerpieces to finish off the look.

As the sun was setting, the candles were being lit and the deejay, Corey Sanford of Music Masters arrived. As his set-up was complete, the speakers filled the room with some heart pounding dance music, just foreshadowing what was to come later that evening. He slowed it down before the guests arrived, appropriate for cocktails… it was very Le Colonial Lounge.

I finished getting myself ready when I heard the mother of the bride. I came to greet her and she smiled and said to me, the room looked so beautiful and it was better than she had imagined! I gave her a big hug, we tied up some few loose ends and I gave her the tour of Salvage One! She LOVED it! That made me so happy! She worked so hard on the wedding and I am so glad that we were able to make her happy too! 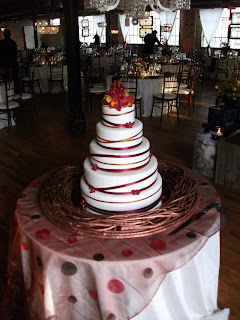 The last stop on mom’s tour was taking her to see the cake that was delivered by the owner Laura of Bon-Bon Cafe. It was five layers of delightfully deliciousness! (Okay, I am skipping ahead, but it was so good!) The base that it stood on was made for this wedding cake. It was copper branches, intertwined around a mirror for the base. It was really cool! The bride’s mom found this cool sheer fabric which was a great finishing touch!

Just before the guests arrived, one of the photographers with Studio Verite Photography had arrived. She was ready to get photos of the room and of the guests as they were coming in. Here was one that I took… I am sure that it will not match the stellar quality of work that they had shot that night but it’s still pretty good.

As the guests came to the top of the stairs 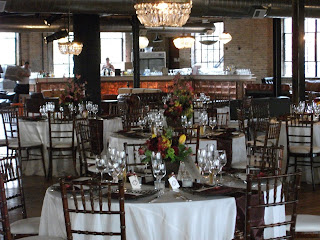 , they were greeted by the servers with Caprinas made with Cachaca that was imported from South America… this was the real deal people! Passed hors d’oeuvres were on their way from Chef Luke and my AMAZING AND AWESOME Associate Planner, Julie, was in the back assisting the kitchen. She knows how to run and event from start to finish and can help in any department! Did I mention she is AWESOME!!!

Around 7pmish, the Bride & Groom were welcomed to Salvage One by their guests as they were announced into the room and were greeted with a loud roar and enjoyed their signature drink. After about 30 minutes of them meeting & greeting, we had the guests seated at their tables, followed by a heart warming speech from the bride herself to her parents. Dinner soon followed.

Chef Luke coursed out an exquisite meal which began with an Arugula Salad with fresh strawberries, candied walnuts shaved fennel, dressed with a sweet basil vinaigrette. Perfect salad course for an unusually warm Saturday Spring Evening. Entrees to follow which the guests had a choice (pre-determined of course) of either a Braised Short Rib in a Cabernet reduction & potatoes dauphoinse, or Grilled Escolar (which is a white fish) with Israeli couscous and both entrees paired with a portabello tower. Again, an AMAZING dinner that was DELICIOUS! Two nights in a row chef! When are you auditioning for Top Chef?!?!! 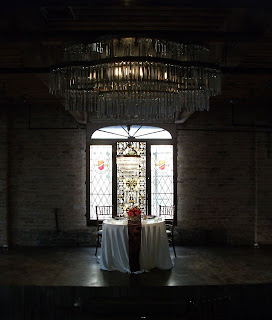 the night away and enjoyed a great sweet table layed out my fabulous Associate Julie with pedi fours by Bon-Bon and Banana Bread Pudding Skewers by Bonsoiree. YUM!!!

Monday morning came, after all of the dust had settled, the rentals were returned, the staff had rested, the liquor from Binny’s returned, the tables restocked at Tablescapes, and the floors were once again mopped at Salvage One. I found an e-mail from the bride and groom in my in-box that morning. They were on their way to the airport to leave to go on their honeymoon and wanted to thank me before they left. They said that the wedding was beyond their dreams! It was the best way to start off a Monday after a long weekend. It truly made me remember why I love doing what I do.