The first wedding of 2010 for Liven It Up Events just happened and I am so excited to be able to share it with all of you! It was an amazing day… completely stress free for the bride & groom. Everything went smoothly, minus the crazy windy weather, but it’s Chicago and it’s March. You never know what can happen…

The day began with the bride getting ready at The Four Seasons Hotel on Delaware. Before any of the wedding vendors folks got there, she received an hour long massage! Not a bad way to start off the wedding day. When I arrived Sonia Roselli of Sonia Roselli Esthetique and her team had already began the hair & make-up for our lovely bride! There were a few delivery hiccups that I had to take care of but nothing too crazy! Again, that’s why I get hired… to handle any of those situations!

After getting ready for about an hour, Jeremy Lawson of Jeremy Lawson Photography arrived and began snapping some photos of our bride’s shoes, accessories, and getting her make-up put on by Robin. Just working with Sonia & Jeremy in the hotel room, I could just tell that we were all going to have a great day making the vision come to life! 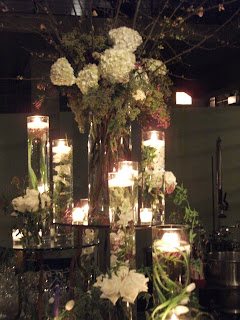 I had gotten our lovely bride on her way to meet her fiance… almost husband, I made my way over to the venue for the ceremony & the reception, A New Leaf, and found Laurie & Michelle (who I totally love and adore) working on this great centerpiece for the food station table. It was inspired by a wedding I had at A New Leaf last year in the spring and I just thought the hydrangeas, and the blooming branches were amazing! 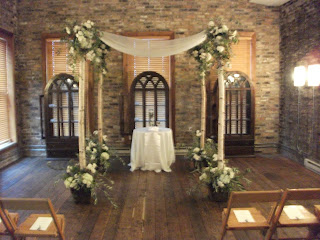 After getting some of the bride & grooms belongings to the necessary places… you know the usual, getting the bird cage which was used as a gift card box set up, getting the ceremony items in place, and so on, I made my way to The Apartment and found a gorgeous chuppah that was literally a sketch that Michelle, the bride & I worked out on a Wednesday night in February. It was so beautiful… the reaction I had was the same as the bride when she entered the Apartment for the first time later that day! All I had to say was Cheers to Michelle! She did a fabulous job!! 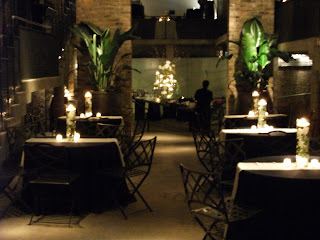 The stage was beginning to be set. And then the big truck rolled up front… it was The Hearty Boys Catering. Aurianne & her crew began setting up the room with linens, tables & chairs, while chef was preparing a meal that was served in food stations that included Beef Tenderloin with Which Chocolate Wasabi Cream (YUM!), their famous pasta station, and my favorite oh course, the Maki Sushi Station! I just loved how the room came together… I always do!

About 6:00pm or so, the room was set, the candles were lit, the centerpieces on the table and the delicious aroma of food was in the air as the guests arrived. Cage and Aquarium had arrived to mix all night for the reception and the cupcakes from Amy Beck Cake Design were delivered and set-up!

The ceremony began at 6:30pm… I was right on time with Park West Strings playing live and the the man who made it official was Rabbi Petuchowski. It was a short ceremony, but sweet and personal. Brilliant! 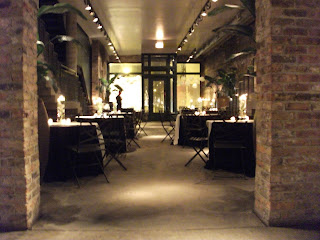 Cocktail hour went into full effect at 7:00pm with passed mojitos and wine service, with toasts at 8:00pm. Dinner went underway and everyone enjoyed the full menu. That led us to cutting the cupcakes in lieu of cutting the cake and then into the first dance! With some tables removed, the dancing came underway and later on everyone enjoyed passed mini burgers with sweet potato fries! Chef explained that they were made fresh on site… just love that!

Midnight rolled around and it was time for the wedding to conclude. As guests left, they grabbed a bag of Garrett’s Popcorn and made their way onto the after party. As I put the bride & groom into a cab, the bride asked, “Is this it? Do we have to part ways?” I told her, “We are not parting ways… just Facebook friend me and we are linked for life!” I thanked her for letting me be a part of her wedding day and hopefully, I will be able to stay in touch with them more than just on Facebook! They were just a delight to work with and it was a great way to begin the 2010 season of weddings for Liven It Up Events!